As published in my monthly column in RVWest

I recently travelled to China to visit my son, and never was I so grateful for email or Skype as I was then. It started making me wonder how others communicate while travelling in their RVs down south, so as usual I sent out a questionnaire to some of my Canadian friends in Arizona and California to see how they managed. A variety of responses were given—I will share these with you.

Skype: I love it. It is not always as reliable as I would like it to be, but I have been able to connect successfully with people all over the world using their computer-to-computer plan. With the video capacity, it is really nice to see the person I am speaking with. I did learn that when there was a slow connection I could turn off the video to make it work a bit better. I also use the message system where I can send live messages to my connections and instantly receive a response if they are online. Skype is very easy to use and the best part is that it’s free. 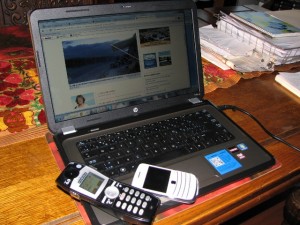 Magic Jack: For a cost of approximately $40 some Canadians purchase a Magic Jack, which plugs into a computer and gives them free long distance calling back to Canada for the first year. They have a new product called Magic Jack Plus, which allows you to use the Magic Jack without having to plug it into a computer—but that’s more for those who are in a permanent home rather than in an RV.

This is a good product if you are making business calls and may be put on hold—something you can’t do with Skype. To the person on the other end of the line, it’s just like any regular incoming call. If the Internet connection is at least four bars then your phone will also have a good connection.

Net 10 or Tracfone – prepaid cell phones: For under $50 it is possible to purchase a cell phone, receive a number and get 300 minutes worth of calling. From that time on it is pay-as-you-go, and minutes can be purchased at stores like Wal-Mart, dollar stores or truck stops. These cell phones are mostly for communicating with your friends who are also travelling in the U.S. and want to stay in touch.

If you return to Canada and there aren’t enough days left on the phone to last until you return to the U.S., the phone will no longer be available when you get back. However, if you purchase enough time so there will be minutes left on the phone for the following year, you can then use the same number when you return and carry on as usual. If not, the next year you will have to purchase another phone and get a new phone number. Most keep their number going each year rather than have to go through the hassle of having a new number. A couple of my friends have had the same U.S. number for four years.

Internet: This isn`t even a luxury anymore. I consider having an Internet connection to be a necessity. There are lots of free Wi-Fi locations all over the country including most laundromats, libraries, campgrounds, etc. However, when boondocking or wanting to use your computer in the comfort of your RV, it’s probably best to sign up for service with a reliable provider. For about $50 per month Verizon Wireless provides around five gigabytes of usage and the Magic Jack works really well on it. This is mostly for a two-year contract and when the RVers head north in the spring they put it on vacation mode until they return; although it extends their contract, they feel that it is worth it.

There are obviously other methods of communicating other than the ones I have listed here, but use this information as a starting point and know that there are options.

A Guide to Healthy Eating for Full-time RVers